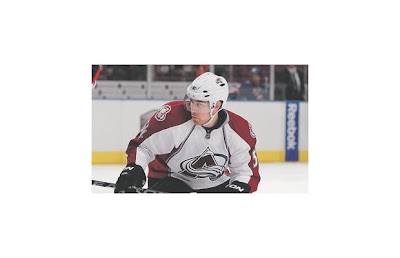 Yesterday the Express had a chance to go down to Rogers Arena to watch the Colorado Avalanche game day skate. And have a word with Express alumni David Jones and Brandon Yip now regulars with the Avalanche.
Here's a great article from today's Vancouver Province.

It was a familiar scene for Brandon Yip and David Jones at Rogers Arena on Tuesday morning, the NHL players meeting members of the Junior A Coquitlam Express.

Except last time Yip and Jones went through it, they were the pups with the Express and Brendan Morrison was the NHLer.

"It was always cool to come down and watch the guys warm up and see both teams," the 26-year-old Jones said after the Avs morning skate Tuesday.

"It's crazy to think that not too long ago that was me up in the stands and now we're playing here.

"Absolutely I remember coming down to the rink and watching the pregame skate," the 25-year-old Yip added. "It was a pretty cool experience."

Those rounds don't even exist any more.

Jones, taken with the fifth-last pick at No. 288 (the Canucks passed three picks earlier), has the added honour of being the lowest draft pick of the Nordiques/ Avalanche franchise to actually play in the NHL.

"But you know what?" Jones said. "It was really exciting. I had no idea I was going to get drafted.

"I got a call from my mom and she said, 'You got drafted, what does that mean?'

The Avs, in fact, had a heated argument about whom to take with that last pick in 2003.

Scout Glen Cochrane, the former Canuck and Flyer, insisted it be Jones and, as others argued against him Cochrane phoned Express GM Darcy Rota around 8 a.m. Vancouver time.

"Glen really believed in David, that he'd one day play in the NHL," said Rota, in the stands with his players for Tuesday morning's Avs skate. "He said to me, 'Darcy, tell me again about David Jones.' I said, 'Glen, you and I have talked so many times about this player -- take him.' "

Jones and Yip are among five Avs who played their minor hockey in the Lower Mainland, but only Scott Hannan (23rd overall in 1997) was drafted higher than the seventh round.

"I just kept focusing on getting to the next level," Yip said.

Jones was 2-1-3 recently against Detroit and is trying to put a dismal season last year behind him: When he suffered a season-ending knee injury on Nov. 28, 2009, he was second on the team in goals (10 in 23 games), and led the Avs in game winners (three) and short-handed goals (two).

Yip had 11 goals in 32 games last season, and jumped out of the gate at 1-1-2 plus a shootout winner in his first three games this season before a pulled groin slowed him down.

"He's a hard-working guy, he's got to be a real thorn in the side of the opposition, that has to be his game.

"And he's got the ability to put the puck in the net at times."

Up in the stands there was a junior GM bursting with pride. gordshockey@twitter.com/ gmacsports