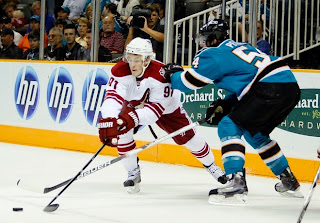 After spending all of last season in San Antonio for a year of development, it's much different story for Kyle Turris than the one from a year ago. The former Express superstar will be starting the season with the Phoenix Coyotes.
Here's the story from the Coyotes website.
Coyotes Prepare Roster for Prague
By Anthony Perez
GLENDALE -- After a day off on Thursday, the Coyotes were back at practice on Friday at the Alltel Ice Den in Scottsdale in preparation for Sunday’s departure to Europe to start the regular season.

“It (practice) was good today,” Head Coach Dave Tippett said. “…You expect the pace to pick up, but it was very good today. Guys worked hard… There were a lot of things we wanted to make sure were in place before we leave, and the guys worked very hard today.”

Friday’s practice also signaled a shift from competition for roster spots to preparation for meaningful games. Phoenix will play two regular-season games vs. Boston in Prague, Czech Republic on Oct. 9 and Oct. 10.

Center Kyle Turris, the third overall pick in the 2007 NHL Entry Draft who played all of last season in the American Hockey League, has made the roster. Center Kyle Wellwood, who was in training camp on a tryout basis, was released.

“I feel like, overall, I’ve grown as a player in every aspect,” Turris said. “My defensive game, my protecting the puck, physically stronger, better in face-offs; everything I think has just grown and made me a better player.”

Turris, who played 63 games for the Coyotes in 2008-09, says he’s better prepared for the NHL this time around.

“I think I know what to expect and I’m just going to come work hard every day, have a good start to the season and just continue that on throughout the rest of the season,” Turris said.

Tippett announced the team would take eight defensemen to Europe.

“We’ve got a couple guys that are nursing some minor injuries, so we’re going to keep the defensemen we have right now,” Tippett said. “(Derek) Morris is nursing a bit of an injury, so he’s day-to-day. He’ll be fine to go on the trip, but we just decided to keep eight defensemen around right now.”

Tippett also talked about forwards Viktor Tikhonov and Mikkel Boedker, who were sent to the team's AHL affiliate in San Antonio on Thursday.

“They are very close to NHL ready,” Tippett said. “…Both of them had very good camps. We’re deep on the wings right now. There’s some veterans who are going to get an opportunity to see what they can do, but both those guys are certainly knocking right on the door.”

The Coyotes will play the KHL’s Dinamo Riga in an exhibition game on Wednesday before opening the season on Oct. 9 against the Bruins at the O2 Arena in Prague.
Posted by Eddie Gregory at 6:40 PM