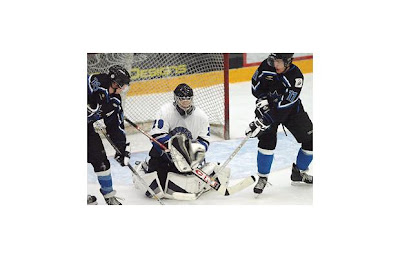 It wasn't uncommon when Wyatt Russell was with the Express during the 04-05 season to see his famous parents Kurt and Goldie Hawn attend games at the Coquitlam Sports Centre.

Now, the former Express netminder has entered the family business.

He made a guest appearance on the season opening episode of Law and Order Los Angeles which aired Wednesday night.

Wyatt Russell is famous for his parentage: Kurt Russell and Goldie Hawn. He also happens to be a hard-working, aspiring goaltender. Russell was a member of the Charger hockey program for three semesters before leaving to play professionally and attend film school; he would have been ineligible for transfer if he’d completed a fourth semester of credit hours at UAH.

When we think of following our hockey alumni in their future endeavors, it’s usually as they play professionally; in Wyatt’s case, he’ll be showcasing his acting chops on Law & Order: Los Angeles, where he guest stars in the premiere episode, “Hollywood”. L&O:LA airs on Wednesday night’s at 10pm E/9pm C.
Posted by Eddie Gregory at 10:45 PM