DREW AT HIS BEST VS. EXPRESS 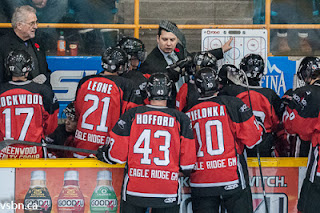 Drew Best scored a hat-trick for the Surrey Eagles first three goals in their 6-1 win over the Express Monday afternoon.

The Express played their final game without Alexander Kerfoot, Zach Pryzbek and Brandon Morley due to their World Junior A Challenge commitments. In total the Express were without 10 regulars once the injuries were added in.

It didn't take long for Best to strike for his first. A point shot by Dan O'Keefe was stopped but the rebound was kicked right to Best who snapped it home at 1:58.

The Express responded minutes later on the powerplay and it was their two hottest players teaming up as John Siemer set up Phil Zielonka who snapped a shot past Micheal Santaguida. Zielonka and Siemer each extended their point streaks on the goal. Zielonka is on a 8 game run with 6 goals and 5 assists. Siemer is on a 7 game streak with 6 goals and 4 assists.

Best struck for his second of the game when Beau Orser couldn't find the puck in his feet and Best dug it out and snapped a shot over the left shoulder of Urbani.

The hat-trick for Best was finished off in the second period as Callum Hofford lost his footing at the blueline allowing the Eagles to break in a 2 on 1 and a perfect pass across to Best was snapped home to put the Eagles up 3-1.

The game marked Brady Shaw's first game against his old team following the trade to Surrey three weeks ago. He picked up his first point of the game 38 seconds after Best's third of the game as Shaw took the puck to the net and he and Urbani came together and the puck came out to Demico Hannoun who had a gaping net to snap the puck home.

Nicholas Pierog made it 5-1 after Mason Blacklock protected the puck along the end boards then set up Pierog who snapped it past Urbani. Brady Shaw picked up his second point of the game who set up Stefan Burzan who was alone in front of the net and fired a wrister past the first year Express netminder.

The Eagles built up their 6-1 lead through two periods. In the final frame the inexperienced Express didn't let the lopsided score discourage them. They fired 17 shots Micheal Santaguida's way but he was there to turn them all aside. The 17-3 Express advantage in shots allowed them to nearly match Surrey's shot total in the game. The final number was 36-35 in favour of the Eagles.

The Express are next in action Saturday night in Chlliwack. And they will welcome back Kerfoot, Morley and Pryzbek with open arms. They went 3-4 in the 7 games during their absence at the World Junior A Challenge.
Posted by Eddie Gregory at 6:35 PM