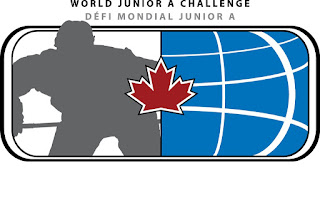 Returnees Alexander Kerfoot and Brandon Morley plus newcomer Zach Pryzbek will play for Canada West at the upcoming World Junior A Challenge in Darmouth Nova Scotia starting next week.

This is the first time the Express will have 3 members on the Team Canada West team. In the inaugural event in 2006, the Express had a pair of representatives (Kyle Turris and Tyler McNeely)

The BCHL is well represented among the 22 players with 15 players representing 8 BCHL teams. Kerfoot and Morley along with Evan Richardson of Powell River, Vernon's Aaron Hadley and Penticton's Troy Stetcher are back for a second go round after helping Team Canada West win gold at the World Junior A Challenge last year looking for a repeat performance. Last year the line of Kerfoot, Morley and Richardson was instrumental helping Canada West win the gold medal at the World Junior A Challenge in Langley.

This season Kerfoot is second in Express scoring with 6 goals and 16 points in 12 games. Prior to the season he committed to Harvard University for the fall of 2013. He was selected by the New Jersey Devils in the 5th round 150th overall. He won a gold medal at the 2011 World Junior A Challenge.

Pryzbek is in his first season with the Express. He has 3 goals and 6 points in 14 games this season. He is committed to Brown University for the fall of 2013.

Morley was acquired in a trade earlier this season from the Surrey Eagles where he was their team captain in exchange for Brady Shaw. He has 5 assists in 13 games this season. He won a gold medial at the 2011 World Junior A Challenge.

The 2012 World Junior A Challenge runs from November 5-11 in Darmouth, Nova Scotia. Team Canada West will play one exhibition game before the tournament begins this Saturday vs. last years Bronze Medalists from the USA. They will begin the tournament Tuesday vs. Czech Republic.

Posted by Eddie Gregory at 9:45 AM