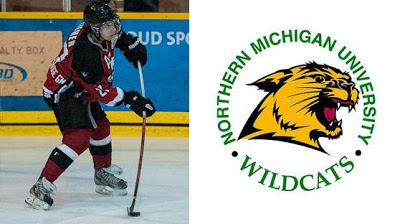 The Coquitlam Express are pleased to announce that forward John Siemer has committed to Northern Michigan University for the fall of 2013.

The Glendora California native is in his second season with the Express. In 21 games this season, Siemer is leading the Express in scoring with 11 goals and 26 points. Numbers that are good enough to put him among the BCHL scoring leaders.

In his first full season in the BCHL, the skilled Express forward scored 28 goals and 59 points in 50 games. He added another goal and three points in six playoff games vs. the Powell River Kings.

Siemer is the second Express player to commit to Northern Michigan joining first year defenceman Callum Hofford. The Express now have 10 players on their roster with post secondary education commitments.

Congratulations John.
Posted by Eddie Gregory at 12:29 AM