VEES WITH CLINICAL PERFORMANCE VS. THE EXPRESS 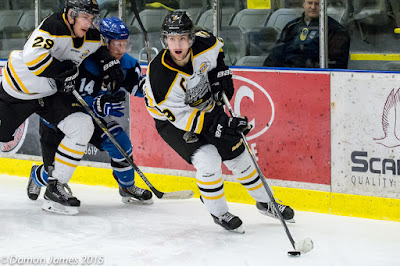 Penticton had their 23 game winning streak come to an end last night in Langley Friday. Saturday, the Vees took their frustrations out on the Express like a nest of angry bees.

The 38 minutes between the opening minute of the game and the final minute of the second period Penticton put on quite a display en route to a 8-2 win over the Express. Click here for boxscore

Then the Vees began to take control of the game.  Their speed and skill was on display in full force.

Penticton would go on to score the next 8 goals in the game.

Tyson Jost and Dante Fabbro who are expected to be first round picks in this coming NHL draft looked every bit the reason why they get the attention they do.

Fabbro showed a great release and the ability to jump into the play on his two first period goals. Jost showed his great hands in tight for his lone goal of the night tucking the puck past Tyger Howat. He was dangerous almost every single shift he was on the ice for the Vees and far away the best player on the ice. Jost finished with 5 points with one goal and four assists.

In addiiton to the two goals from Fabbro and the single from Brodzinski, Demico Hannoun also scored in the first period with a nice toe drag then unleashing a wrist shot while falling to the ice. 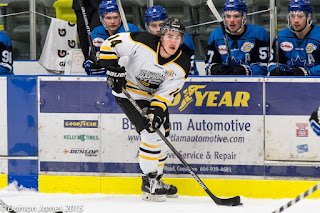 As good as the Vees looked in the first, Penticton looked even better in the second period. Scott Conway and Chris Gerrie scored 33 seconds apart to make it 7-1 Vees. That meant the end of the night for Tyger Howat after allowing 7 goals on 24 shots.

Lawson Fenton came in to finish the game. He allowed the 8th Vees goal on the 2nd of the night for Easton Brodzinski.

But if you're looking for any positives for the Express in this game it's how Fenton shut the door the rest of the way. Fenton finished with 19 saves on 20 Vees shots. 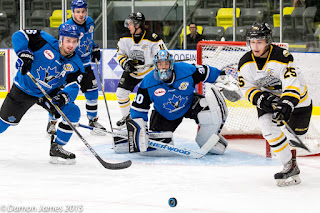 At the other end Anthony Brodeur knew what his father Martin went through during his heyday with the Devils seeing very little rubber. The Express didn't register their first shot of the second period until the 10:27 mark off the stick of Charlie Barrow.

I had tracked the shots on goal from the 3:30 mark of the first period to the 19 minute mark of the second period and I had the Vees with 35-4 run of shots.

Taylor Green rounded out the scoring burying his own rebound for a power play goal and his first of the season in the final minute of the second period. 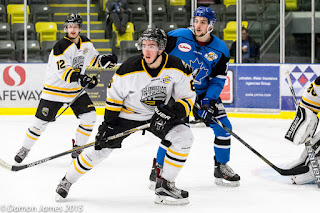 Sure this game didn't go the Express way, but there's still plenty of good things for the Express going forward. When you look at the schedule as a whole this week, they had three tough games. And they came away with 3 out of a possible 6 points. And they were one shot away from getting 4 points this week.

That's the positive to take out of this week. They can only build on it going forward starting next Friday vs. Prince George.
Posted by Eddie Gregory at 10:39 PM