Express forwards Captain Jackson Cressey and Blake Hayward have been invited to selection camp for Team Canada West for the upcoming World Junior A Challenge.

Selection camp will take place from December 5-8 in Leduc, Alberta. A total of 60 players have been invited and they will play four intrasquad games. 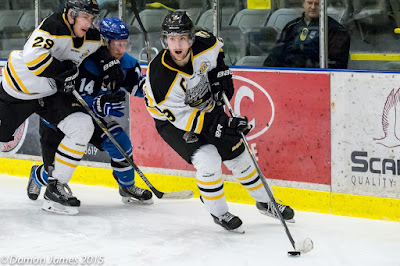 Jackson Cressey is in his third full season in the BCHL. Prior to the 2015-16 season he was named the Express captain. He's had a breakout season thus far with 11 goals and 27 points through 20 games this season. In 138 career BCHL games the West Vancouver native has 31 goals and 81 points.

Earlier this season Cressey accepted a scholarship to Princeton University for the fall of 2016. Cressey was a member of the Express 2014 Fred Page Cup championship team.

Blake Hayward is in his first full season in the BCHL. He has 2 goals and 5 points in 24 games this season. One of his goals this season is a game winning goal. In 29 career games with the Express Hayward has 5 career points. 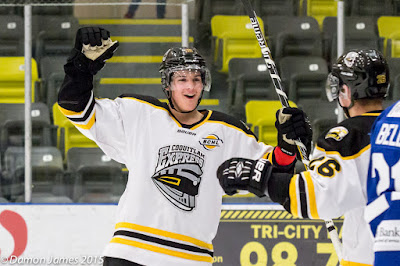 This years World Junior A challenge will take place from December 13-18 in Cobourg and Whitby Ontario.

Express Head Coach and GM Barry Wolff will serve as an assistant coach for Team Canada West. This will be his second stint coaching at the World Junior A challenge. He also served as an assistant at the 2010 event in Penticton.

The last time the Express were represented at the World Juinor A Challenge was 2012 when Alexander Kerfoot, Zach Pryzbek and Brandon Morley dressed for Team Canada West.

Congratulations Jackson and Blake. And best of luck in Leduc.

Posted by Eddie Gregory at 8:19 AM